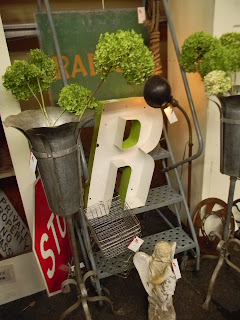 Junk Bonanza at Canterbury Park, a visual feast not for the faint of heart. 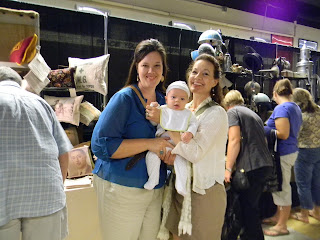 We went on Friday and it felt crazy crowded, but apparently the day before was much busier.
Here is baby Malachi Jude with me and my friend Amanda. 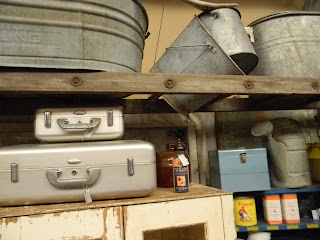 My favorite booths had focus and simplicity.  I always like the galvanized metal. 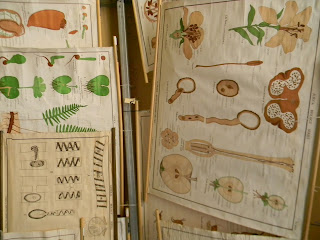 Old science diagrams.  These were so cool, but I don't have the wall space. 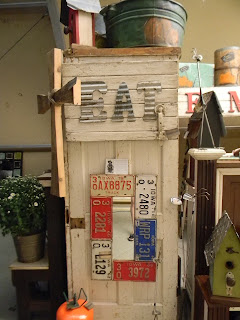 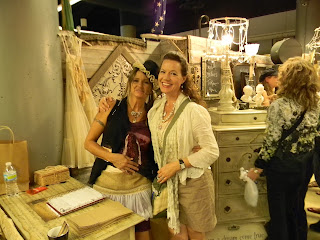 My friend Mary from The Vintage Pixie.  What a lovely lady....and her booth was gorgeous. 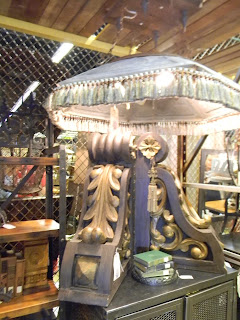 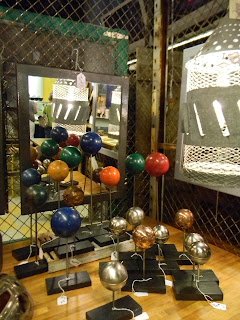 Art is what you place on a pedestal.  Again at Histories. 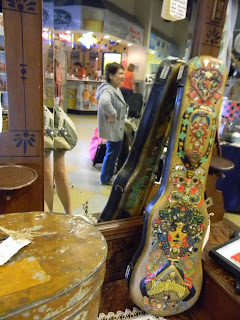 A Cajun-decorated violin case.
This reminded me of a favorite book,
Accordian Crimes, which begins in New Orleans. 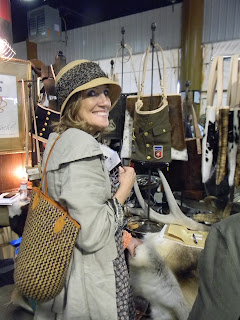 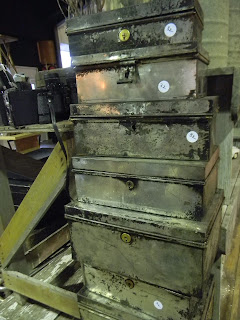 The most eye-catching displays were like objects, grouped together.
I love these industrial-looking boxes and cases. 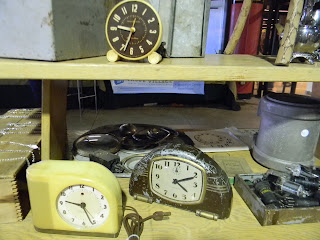 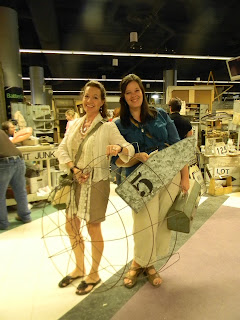 Amanda found some metal pieces, and at the last minute,
I found this wire tree basket.
I am hopeful that my husband will make it into
a cool chandelier. 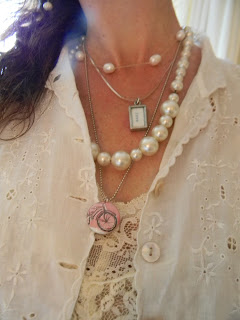 The jewelry booths are always smokin'.  I think it's because
the antique-y spaces are so overwhelming.
Here are some of my own necklaces (the pearls)
along with one from Gretchen (the rectangular pendant)
and a new pink bicycle necklace from my friend Carla.
It was great to see her again. 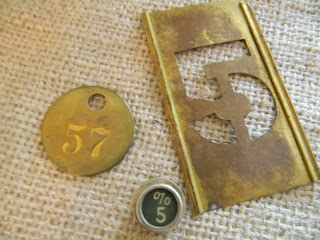 I was on the hunt for the number 5.  Malachi is our 5th child!  These should
make a great necklace eventually......

Posted by Laura Murphy at 8:13 AM 0 comments 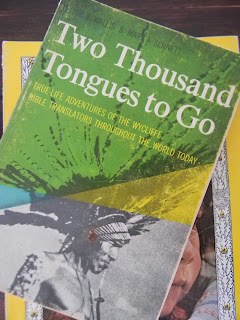 My sister-in-law gave me this book recently.  I immediately turned to the stories about Peru.
Although it is an old book, published in 1959, I recognize some of the names of missionaries.
I recognize all of the people groups mentioned: the Amarakaeri, the Aguaruna, the Yagua, the Amuesha.
And the Piro.  I had never heard their story before.

In 1946, a missionary named Esther Matteson arrived to work among the Piro tribe. Her translation partner soon became ill.  Esther stayed in the village.  For over a year, she lived alone in a leaky hut
with no radio communication or air service.

She had been sent to a "desperately needy tribe of Indians,
degraded by contact with the worst type of 'civilization.'"

The degradation of the Piro tribe was such that there was often confusion as to the paternity of the children.
Immorality and drunkenness permeated the culture.
Esther changed translation helpers three times,
but not one could relate a folk story that could be printed in a children's reader.

Esther's response to the depravity she found was this:
"Just think how wonderful it will be when they have Christ!"

After a year of language study, Esther began translating the life of Christ.
Finding the correct words was often a challenge.
She said, "Yesterday I found a word which will probably translate 'peace.' The Piros have a way of expressing extremes by opposites. In a story, a huge boa constrictor had just swallowed a man, and a terrified onlooker told his friends, "I didn't have peace." So you see something of the way in which we hunt out the words we will need for translating."

At the first reading of the Scriptures in Piro,
Esther sat on the dirt floor holding the book,
and the people gathered around her.
They listened intently as Esther read the story of the life of Jesus,
the cross, and the resurrection.
At the end of the story, she read a list of salvation verses.

At the telling of Christ's death on the cross,
the women's eyes filled with tears.

In the next year, there were fifty new Piro believers.
The word of the gospel began to change the people.

In 1949, an official from a penal colony in the jungle
related an unbelievable experience he had had with the Piro.

"It was his job to buy food for the colony, and in his travels he had come to know the Piros and their ways.  According to him, they were about the lowest type of human life in the jungle.  They never had anything to sell and very little to eat, since most of them were habitually drunk and neglected their crops and banana groves. He usually just ignored them.

"But one day as he was passing the Piro village of Huau he saw something that made him stop and investigate.  There were new houses, cultivated and cared-for fields, and people walking about on steady feet!  Everyone was busy, and industry and happiness were in the air.  He ordered his boatman to pull over to the bank.  To his amazement there was a school in the village, and Piros were reading.

"He learned that a Senorita Esther had taught them, and that people in many other villages were also reading now.  The Piros told him that the senorita had translated some of the Bible for them,
and that she would be back soon.

"Like a man in a dream, the Peruvian official went to other villages up the river, and sure enough, it was just as the villagers of Huau had told him -- the Piros had changed."

(From the book by Ethel Emily Wallis and Mary Angela Bennett)

This is my favorite kind of story.
It reminds me of my childhood,
of the very human missionaries I observed while I was growing up,
who while under attack from the enemy
and while enduring all kinds of setbacks and discomforts,
persevered in the work of translating
the only book that really matters.

"Joys are always on their way to us. They are always traveling to us through the darkness of the night. There is never a night when they are not coming." (Amy Carmichael)

Laura Murphy
Minneapolis, Minnesota
I love to share ideas about design, food, books, parenting and life, believing that there is joy in the journey.

"Can we say 'Hush' to ourselves? Can we command our thoughts? I believe we can. God has given us the power to close the shutter of our minds upon hurtful, weakening thoughts. He has provided all manner of shutters. A book that swings us off ourselves and into another world is a very good shutter; a song set to music; beauty; the dear love of those who love us. Above all, there is this: look at Calvary. Look steadfastly. Take time to look and all within you will be hushed, for power streams forth from Calvary. We need never know defeat." (Amy Carmichael)

A Prayer (Not by Joel Osteen)

"Take from me, Oh Lord, that self-pity which love of myself so readily produces, and from the frustration of not succeeding in the world as I would naturally desire, for these have no regard for your glory. Rather, create in me a sorrow that is conformable to Your own. Let my pains rather express the happy condition of my conversion and salvation. Let me no longer wish for health or life, but to spend it and end it for You, with You, and in You. I pray neither for health nor sickness, life nor death. Rather I pray that you will dispose of my health, my sickness, my life, and my death, as for Your glory, for my salvation, for the usefulness to Your church and Your saints, among whom I hope to be numbered. You alone know what is expedient for me. You are the Sovereign Master. Do whatever pleases You. Give me or take away from me. Conform my will to Yours, and grant that with a humble and perfect submission, and in holy confidence, I may dispose myself utterly to You. May I receive the orders of Your everlasting provident care. May I equally adore whatever proceeds from You."
-Blaise Pascal

We enter into solitude first of all to meet our Lord and to be with him and him alone.
Our primary task in solitude, therefore, is not to pay attention to the many faces which assail us, but to keep the eyes of our mind and heart on him who is our divine savior.
Only in the context of grace can we face our sin;
only in the place of healing do we dare to show our wounds;
only with a single-minded attention to Christ can we give up our clinging fears and face our own true nature.
As we come to realize that it is not we who live, but Christ who lives in us, that he is our true self, we can slowly let our compulsions melt away and begin to experience the freedom of the children of God.

Do not despair, thinking that you cannot change yourself after so many years. Simply enter into the presence of Jesus as you are and ask him to give you a fearless heart where he can be with you. You cannot make yourself different. Jesus came to give you a new heart, a new spirit, a new mind, and a new body. Let him transform you by his love and so enable you to receive his affection in your whole being.

(The Inner Voice of Love)

To listen is very hard, because it asks of us so much interior stability that we no longer need to prove ourselves by speeches, arguments, statements, or declarations. True listeners no longer have an inner need to make their presence known. They are free to receive, to welcome, to accept. Listening is much more than allowing another to talk while waiting for a chance to respond. Listening is paying full attention to others and welcoming them into our very beings. The beauty of listening is that, those who are listened to start feeling accepted, start taking their words more seriously and discovering their own true selves. Listening is a form of spiritual hospitality by which you invite strangers to become friends, to get to know their inner selves more fully, and even dare to be silent with you.

(I realize the links don't work for many of these, but I like to keep track of my current faves)